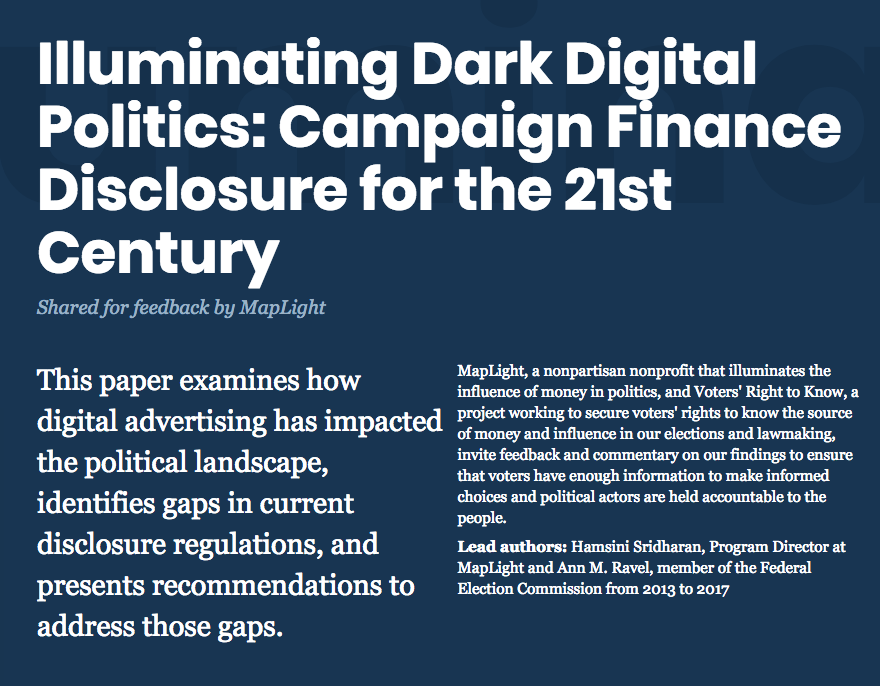 A new report from MapLight and the Voters' Right to Know project explores disclosure gaps in online advertising.

Illuminating Dark Digital Politics: Campaign Finance Disclosure for the 21st Century, written by Hamsini Sridharan of MapLight and Ann Ravel, former Chair of the Federal Election Commission, outlines a brief history of campaign finance disclosure in relation to the internet; examines trends in political advertising and campaigning online; and explains why additional regulation is necessary to ensure transparency for political spending online while promoting democratic speech.

The report offers concrete recommendations for policies moving forward and explanations of their impact, including:

“Providing voters with meaningful, timely information about who is spending to influence elections means adapting our policies to fit the methods of the modern campaign,” said Ann Ravel, co-author of the report and steering committee member of the Voters’ Right to Know project. “Ensuring transparency and accountability in elections starts with modernizing online disclosure policy now.”

The report notes that online political advertising is increasing rapidly, though it’s virtually impossible to track exact spending figures due to the gaps in disclosure policy. According to an estimate from Borrell Associates, a company that tracks and forecasts ad spending, the 2016 elections saw digital political spending exceed $1.4 billion, an increase of more than 700 percent compared to the 2012 election cycle.

“The lack of regulation around online political advertising essentially leaves voters in the dark,” said Hamsini Sridharan, co-author of the report and Program Director at MapLight. “The way political campaigns are run has undergone a seismic shift, yet our national policies around political advertising disclosure have hardly moved.”

The report is part of a new project by MapLight to examine dark digital advertising and online disinformation. The  findings are based on interviews with digital campaign practitioners across the political spectrum and a review of commentary by academics and policy experts. The full report is available for public comment on Madison, an interactive platform that allows users to provide annotations and feedback on issues related to public policy.