One of the most controversial provisions is a measure that was written by lobbyists for Citigroup. The provision rolls back part of the Dodd-Frank Wall Street Reform and Consumer Protection Act that prohibits entities insured by the Federal Deposit Insurance Corporation (FDIC) from trading complicated financial devices known as custom swaps, a type of derivative. Just four banks, Bank of America, Citigroup, Goldman Sachs and JPMorgan Chase, control more than 90 percent of the banking industry's swaps market.

Top 10 Representatives who voted 'YES' on H.R. 83 and received campaign contributions from the PACs of the four banks: 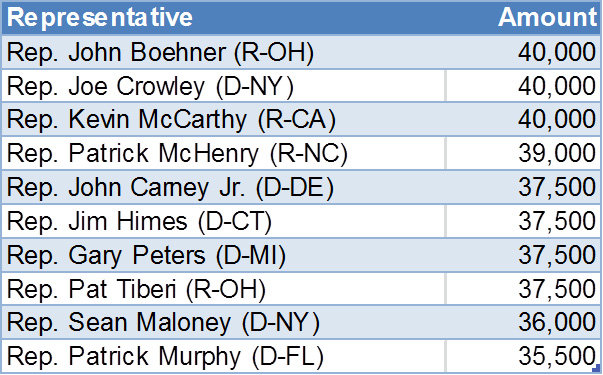 Another provision buried deep in the bill would increase campaign contribution limits for donations to national political parties. Currently, individual donors cannot give more than $97,200 in total to the national party committees. The budget bill would raise that limit to $777,600.  As the Center for Responsive Politics noted, the increase in contribution limits would affect very few people: just 0.04 percent of Americans gave more than $2,600 in the 2014 election cycle, let alone the three quarters of a million dollars the law would allow.

The Senate passed the spending bill on a 56-40 bipartisan vote on Saturday, December 13.

Campaign Contributions Methodology: MapLight analysis of campaign contributions to members of the House voting on H.R. 83 from top banks (Citigroup, Bank of America, Goldman Sachs and JPMorgan Chase) from recently available FEC data as of December 12, 2014 for the period 1/1/2013-11/24/2014.