Sen. Jim DeMint to Leave Senate for the Heritage Foundation 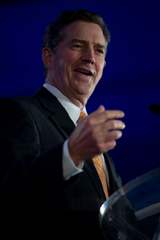 Republican Sen. Jim DeMint of South Carolina announced on Thursday that he will be resigning his Senate seat to head the Heritage Foundation, a conservative think tank in Washington, D.C. The governor of South Carolina will appoint a successor until 2014 when a special election will be held to finish out the final two years of DeMint's term. The Heritage Foundation's political action committee did not report any contributions in the 2012 election cycle; however, they did make $227,000 in independent expenditures (all occurring in October 2012) either supporting or opposing federal candidates.

Data: MapLight analysis of independent expenditures from the Heritage Foundation's PAC in the 2012 election cycle.

METHODOLOGY: MapLight analysis of independent expenditures made by Heritage Action for America in support of or opposition to federal candidates from Jan. 1, 2011-Dec. 2, 2012. Source: FEC.gov. If you use MapLight data please cite accordingly.