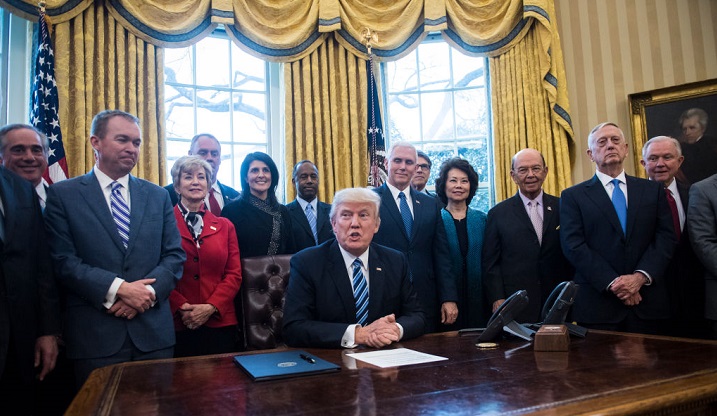 President Trump, surrounded by members of his Cabinet, speaks before signing an Executive Order on White House organization in March, 2017.
Photo by Jabin Botsford/The Washington Post via Getty Images.

Seven current or former members of President Donald Trump’s Cabinet have spent almost $450,000 in political campaign funds since being confirmed by the U.S. Senate, according to Federal Election Commission records.

A MapLight analysis found that about $175,200 has been spent by Cabinet members for bills that include meals, airfare, cell phones, storage units, credit cards, and political software consulting.

The Trump Cabinet members are among more than five dozen former or retiring lawmakers who stand to gain from a lack of rules governing the use of old congressional campaign funds. A proposal being considered by the FEC would require the commission to examine old campaign funds, but it wouldn’t begin to take effect until the next decade, at earliest. Brendan Fischer, an attorney for the nonprofit Campaign Legal Center, said the panel needs to move faster.

“The tens of millions of dollars remaining in campaign accounts for those officeholders retiring this year alone should provide a sense of urgency for the commission to proceed with a rulemaking,” he wrote in a May 21 letter to the panel.

Even after their post-confirmation spending, the seven Trump appointees ended the first quarter of the year with cumulative campaign fund balances that topped $6 million, according to FEC records.

Jordan Libowitz, communications director for the nonprofit Citizens for Responsibility and Ethics in Washington (CREW), said there are “gray areas … but this calls for new legislation from Congress to put some rules on winding down campaign funds.”

Rep. Kathy Castor, a Tampa Democrat, introduced legislation in March that would require lawmakers to shut down their campaign funds within two years of leaving office. She wrote in a May 21 letter to the FEC that the commission should enact rules to “prevent some of the most problematic spending and provide needed clarity to former officeholders.”

The Trump administration has started out with the greatest number of former lawmakers in its Cabinet of any presidency during the last 50 years. Both former President Barack Obama and George W. Bush launched their Cabinets with only four former lawmakers, including both men’s vice presidents. Former President Richard Nixon, whose Watergate cover-up sparked massive campaign finance reforms, only appointed one congressman to his Cabinet in 1969.

The issue of leftover campaign funds has been a problem for decades and goes beyond lawmakers who land Cabinet positions. A January Tampa Bay Times/WTSP-TV investigation found more than 100 congressional campaign committees were used for the personal enrichment of former lawmakers, and in one case, a former employee of a deceased congressman.

The largest share of the $448,900 spent from congressional or presidential campaign funds has gone to legal or accounting compliance firms that help candidates close their accounts when leaving office. Such expenses are generally allowed under FEC rules.

For example, Attorney General Jeff Sessions, a former Alabama senator, spent more than $90,000 from campaign funds in the wake of his February 2017 confirmation. More than $58,000 went for legal or financial compliance; another $14,300 was spent on archiving records. Sessions’ legal work was primarily handled by Jones Day, the largest law firm in the U.S. The firm, whose alumni include White House Counsel Don McGahn, also had been paid $2.7 million through early this year for “legal consulting” by the Trump presidential campaign.

Sarah Isgur Flores, the Justice Department’s director of public affairs, said the campaign money expenditures were “related to several major, pre-confirmation projects that include closing down his Senate office, setting up an archive, transferring the campaign into dormancy, and ensuring legal compliance.”

The Sessions campaign reported a $2.5 million cash balance on March 31.

Former Health and Human Services Secretary Tom Price, a former Georgia congressman who resigned in late September after running up a $400,000 bill for chartered flights, spent $91,800 from a congressional campaign account in the 13 months between his confirmation in February 2017 and March 31. More than $70,000 from the campaign was used to pay a half-dozen legal bills from Dentons, the multinational giant that employs more than 7,000 lawyers.

Records show Price made six payments for “administrative services” totaling $2,800 to Capitol Strategy Group, an Atlanta-based political fundraising and lobbying firm; three of the payments were made after he left the Cabinet. After leaving HHS, Price’s campaign also paid $1,900 in October to Aristotle Software Inc., a software developer that’s been using data to enhance political campaigns since the early 1980s. The campaign reported a closing balance of roughly $1.9 million at the end of March.

Ben Carson, who was confirmed as secretary of housing and urban development in March, has spent more than $75,000 from his campaign fund for the 2016 GOP presidential nomination, according to the FEC. Almost $60,000 of the former neurosurgeon’s campaign money was spent on legal or accounting services, with more than $40,000 going to Rightside Compliance, a McLean, Va.-based consultant whose clients include Great America, the political action committee created by Vice President Mike Pence.

Carson’s presidential campaign committee still had more than $560,000 in the bank on March 31.

Mick Mulvaney, the Office of Management and Budget director who’s come under fire for acknowledging that lobbyists who contributed to his congressional coffers were given more attention than other advocates, has spent almost $55,000 in campaign funds since his February confirmation.

The former South Carolina congressman spent about $40,000 on consulting, including a “strategic consulting” payment of $1,985 to former South Carolina Rep. Eric Bedingfield. Mulvaney’s campaign also paid $750 to Al Simpson, his former congressional chief of staff, for consulting around the same time that Simpson was lobbying the Mulvaney-led OMB. Simpson is currently a managing director at Mercury LLC, a lobbying firm that’s part of a wide-ranging investigation into foreign influence in U.S. elections.

Mulvaney, who served as a member of the South Carolina Senate from 2009-11, transferred $32,500 in congressional campaign funds to his state campaign committee. Records from the state show Mulvaney accumulated loans topping $125,000 from his 2008 campaign.

The White House didn’t respond to requests for comment. Mulvaney closed the first quarter of 2018 with a campaign balance of $15,800.

Interior Secretary Ryan Zinke, a former Montana congressman, burned through more than $41,000 in campaign funds since his March 2017 confirmation. More than $12,000 has been spent for legal advice; Zinke has been the subject of multiple investigations relating to his travel expenses.

Zinke reported spending $1,875 in campaign funds on software services from Aristotle, as well as $83.98 for “fundraising supplies” from Cabela’s, a Springfield, Mo.-based retail chain of sporting goods stores. His March 31 campaign balance was $16,900.

Dan Coats, the former Indiana senator, reported spending $22,600 in campaign funds after his confirmation as director of national intelligence in March 2017. More than half of his committee spending was related to legal fees and compliance consulting. Coats also spent $2,800 on bills from Aristotle, the political software developer. Data weren’t available for Coats’ most recent campaign fund balance.

Secretary of State Mike Pompeo, who began in the Trump Cabinet as director of the Central Intelligence Agency, has spent almost $73,000 from campaign funds since January 2017. The former congressman, who was the largest recipient of contributions from the billionaire libertarian brothers Charles and David Koch, has paid $8,000 to Aristotle, the political software developer, since his confirmation. The secretary of state also spent more than $20,000 on credit card bills, as well as $294 on framing. Only three days after his confirmation, Pompeo’s campaign spent $5,387 for reimbursement for fundraising services.

Energy Secretary Rick Perry, the former Texas governor whose 2016 White House campaign was highlighted by his description of Trump’s bid as a “cancer on conservatism,” has spent no money from his presidential campaign fund. FEC records show his fund has a balance of $1,818.05.