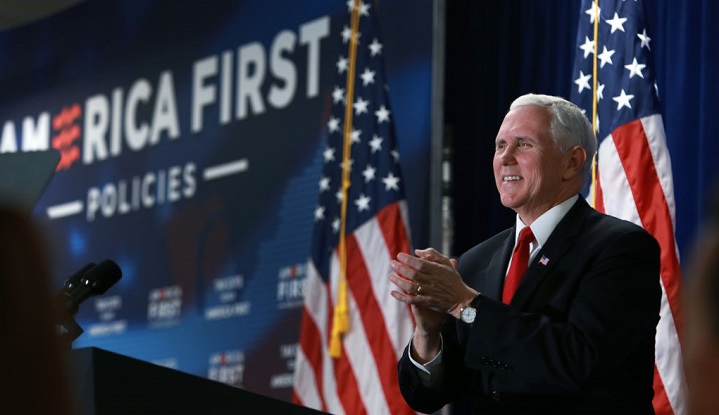 Three Fortune 500 companies have donated at least $1.6 million to a controversial pro-Trump “dark money” organization that’s been criticized for racist, sexist, homophobic, and anti-Muslim sentiments expressed by its staff.

In recent months, CNN found that America First Policies’ advocacy director made racist, sexist, anti-LGBT, and anti-Muslim comments online, while a policy staffer called President Barack Obama “the Islamchurian candidate.” Mediaite published a video of another policy advisor to the group saying that “the only thing the Nazis didn’t get right is they didn’t keep fucking going!”

Asked about the donations and the remarks by its staffers, America First Policies spokesperson Erin Montgomery said, “We don't comment on stories by organizations funded by the radical left, including the Democracy Alliance and George Soros.”

MapLight, a Berkeley, Calif.-based nonprofit organization that seeks to expand the public’s understanding of the role of money in politics, has accepted donations from an ideologically diverse collection of donors, including contributions from organizations and individuals affiliated with the Democracy Alliance and George Soros. MapLight discloses its donors publicly; America First Policies does not.

“CVS Health contributes to organizations across the political spectrum to help shape public policy and address legislation that has a direct impact on the company,” said CVS spokeswoman Carolyn Castel. She said the company’s contribution was made to support advocacy efforts around the Tax Cuts and Jobs Act, the Republican tax bill passed late last year.

“Comments made by employees of America First Policies that were reported after we made our contributions are unacceptable to us,” Castel said. “We have zero tolerance for discriminatory actions or behaviors, and as such we will not be making contributions to this organization in the future.”

Dow Chemical also said it will stop giving money to the pro-Trump nonprofit.

“If [companies] have a problem with being associated with the racist, sexist or homophobic comments of the people who are working for America First Policies... because they worry about what their clients or customers would say, then maybe they shouldn’t do it,” said Marge Baker, an executive vice president at People For The American Way, a progressive advocacy organization in Washington, D.C. “The dark money is such a problem because it allows you to be associated with it but not have any accountability.”

The corporate donors to America First Policies have benefited from Trump’s agenda in a variety of ways. CVS Health, Dow Chemical and Southern Company all reported lobbying on the Republican tax bill passed in December. CVS, the Woonsocket, R.I.-based pharmacy and retail giant, has said the law will save the company about $1.2 billion this year. CVS is currently seeking the Trump administration’s approval for its purchase of the health insurer Aetna.

CVS is boosting employee wages and benefits — another positive result of #taxreform! https://t.co/ZJfasPuw1E

A tweet from America First Policies celebrated CVS after the GOP passed a tax overhaul.

And last year, the EPA reversed its effort to ban chlorpyrifos, a widely used pesticide produced by Dow Chemical that studies show can harm children’s brains. Dow’s former CEO, Andrew Liveris, previously served on a manufacturing council for Trump, and he reportedly attended a dinner that Vice President Mike Pence hosted at his official residence with major donors and corporate executives. Liveris stepped down as Dow’s chief executive in April, after the company completed its merger with DuPont to become the world’s largest chemical firm.

America First Policies has hosted events with Pence around the country this year to promote the Republican tax law. The organization recently announced it would spend nearly $1 million on advertisements to persuade conservative Democrats to back Trump’s pick for CIA director, Gina Haspel. She was confirmed two days later, with support from six Democratic senators.

This story has been updated to include statements from CVS Health and Dow Chemical.