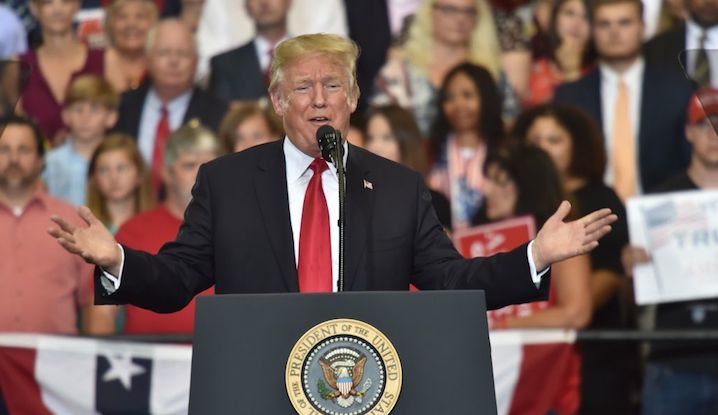 President Donald Trump speaks at a rally in Nashville, Tennessee in May, 2018.
Photo by NICHOLAS KAMM/AFP/Getty Images.

Three major corporate donors to a pro-Trump nonprofit whose officials have expressed racist, anti-Muslim, and anti-Semitic sentiments announced this weekend they would stop giving money to the dark money organization.

Southern Company, CVS Health and Dow Chemical have donated at least $1.6 million to America First Policies, MapLight reported on Thursday. Amid widespread outrage, the corporate titans issued statements over the weekend disavowing the pro-Trump organization and promising to cut off future funding.

“Comments made by employees of America First Policies that were reported after we made our contributions are unacceptable to us,” CVS spokeswoman Carolyn Castel said on Friday. “We have zero tolerance for discriminatory actions or behaviors, and as such we will not be making contributions to this organization in the future.” The Woonsocket, R.I.-based pharmacy giant donated $500,000 to the organization.

"Dow was not aware of any discriminatory actions by staffers at America First Policies,” said Dow Chemical spokesperson Jarrod Erpelding said late Friday. He said the Midland, Mich.-based chemical conglomerate, which gave $100,000 to the organization last year, “will not contribute to America First Policies going forward."

CNN has reported that America First Policies’ advocacy director said that "the black race" has "lax" morals and that black women think "breeding is a form of government employment." He also said he didn’t like Muslims. A policy staffer for the organization called President Barack Obama “the Islamchurian candidate,” while Mediaite published a video of another policy advisor to the group shouting that “the only thing the Nazis didn’t get right is they didn’t keep fucking going!”

America First Policies was created by former Trump campaign officials to support the president’s legislative agenda. The organization reportedly raised $26 million last year. The source of all of its funding is unknown, since the organization doesn’t disclose its donors. CVS Health, Dow Chemical and Southern Company all voluntarily disclosed their donations on their websites.

A spokesperson for America First Policies did not immediately respond to MapLight’s request for comment.