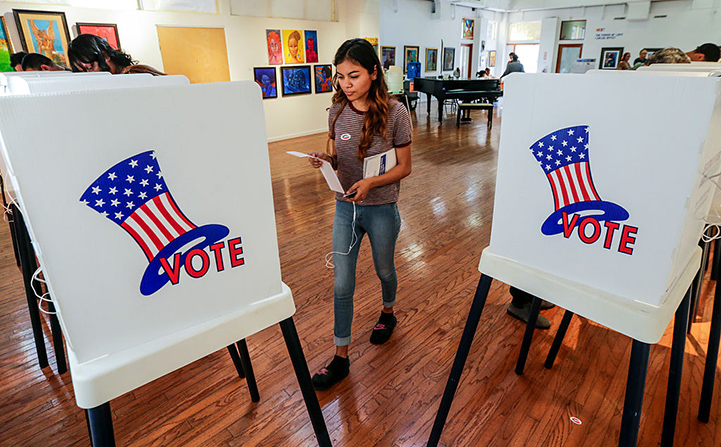 November 9, 2016 - The campaigns for the 17 measures on California’s ballot raised more than $446 million combined. Here is a look at the money behind the biggest winners and losers in those races:

The industry spent more than $109 million to defeat Proposition 61, which would have restricted the price the state pays for prescription drugs. Supporters had raised $19 million.

The firms raised $71 million to defeat Proposition 56, which raises the cigarette tax by $2 per pack. The measure’s supporters, including health advocacy groups, raised less than half as much money -- $34 million.

Supporters of Proposition 64 raised more than $23 million to legalize marijuana in California, including more than $7.3 million from former Facebook president Sean Parker. One Pennsylvania retiree had given more than $1 million to try to defeat the measure. California was one of three states to vote for legalization Tuesday night.

The Los Angeles-based organization contributed $23 million to two measures -- Proposition 60, which would have required actors in adult films to wear condoms, and Proposition 61, the prescription drug pricing measure. Both initiatives failed.

Voters approved Proposition 57, a key part of the governor’s plan to reduce the state’s prison population. Brown gave over $4.1 million from his ballot measure committee to support the initiative, which provides more parole opportunities for some convicted felons. And although Brown remained neutral publicly on Proposition 55, which extends an income tax increase on the state’s highest earners, he benefits from its passage, because he likely won’t have to make big cuts to the state’s budget. (Note: The vote on Proposition 53, another measure backed by Brown, remains too close to call.)

The state’s lieutenant governor not only championed Proposition 63, which requires background checks for ammunition purchases and bans the possession of large capacity magazines. He also contributed over $727,000 from his 2014 campaign committee to support the measure. The National Rifle Association’s advocacy arm and its Political Victory Fund contributed $95,000 in an effort to defeat the measure. Newsom, who is running for governor in 2018, also advocated for, but gave no money to, the campaign to legalize marijuana.

The plastic bag industry raised nearly $2.9 million during this election cycle in a failed effort to convince voters to say “no” to Proposition 67. But the measure passed, making California the first state in the nation to ban single-use plastic bags. That $2.9 million also supported Prop. 65, which would have required fees from the sale of carryout bags to go to a state environmental fund, but voters rejected the initiative.

Charles Munger Jr., a Stanford physicist and a Republican party donor, provided $10.7 million of the $10.8 million raised to support Proposition 54, which requires the state legislature to post bills 72 hours in advance of a vote.

Winners: The Construction Industry and The California Teachers’ Association

Construction companies led the fundraising for Proposition 51, which now allows the state to borrow $9 billion in bonds for school construction. The California Teachers Association backed Proposition 58, contributing over $1.7 million of the nearly $5 million raised to repeal the state’s ban on bilingual education. The two measures faced no financial opposition.

Hospital groups raised $13 million during the current election cycle for Proposition 52 to prevent the state from diverting certain fees away from Medi-Cal. The Service Employees International Union - United Healthcare Workers West had raised money against Prop. 52, but announced in October that it was shifting its resources to other races.

Voters approved an advisory measure, Proposition 59, that asks state lawmakers to use their authority to overturn the U.S. Supreme Court’s 2010 Citizens United decision. The ruling allows corporations and unions to spend unlimited amounts of money on elections, as long as that spending is independent of campaigns. The measure, however, is not binding.