“Too Big to Jail” Banks Are Bankrolling Congress 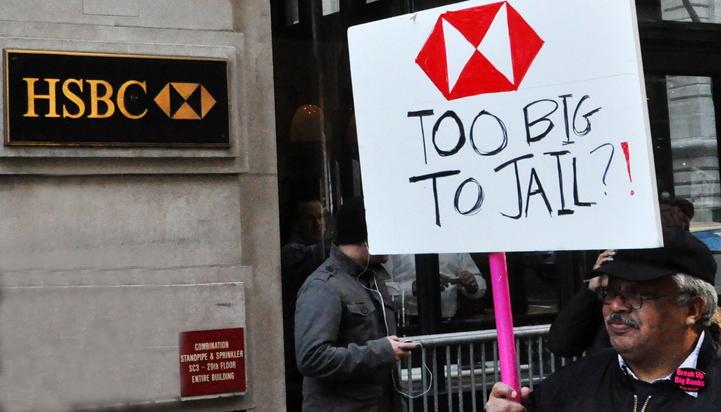 Attorney General Eric Holder recently told the Senate Judiciary Committee that the size of big banks has "an inhibiting influence" on the government's ability to prosecute their criminal activity. "I am concerned that the size of some of these institutions becomes so large that it does become difficult for us to prosecute them when we are hit with indications that if you do prosecute—if you do bring a criminal charge—it will have a negative impact on the national economy, perhaps even the world economy," he said.

It’s unclear just how big a bank has to be to be considered un-prosecutable, but HSBC's recent settlement for enabling drug cartels and rogue states to launder money suggests that even they—the ninth largest U.S. bank by assets and many times smaller than the biggest banks—are too big to prosecute. By facilitating deregulation (Gramm-Leach-Bliley Act), bailing out insolvent institutions (TARP), and voting against limits on bank size, Congress has allowed these banks to grow as big as they currently are.

Data: MapLight has analyzed reported campaign contributions from the political action commitees (PACs) of the nine largest banks, by total assets, to current members of Congress since Jan. 1, 2003.

*Spencer Bachus is the Chairman Emeritus of the House Committee on Financial Services.

Methodology: MapLight analysis of campaign contributions from the political action committees of the nine largest banks, by total assets, to committees associated with current members of Congress since Jan. 1, 2003, based on latest available data from FEC as of 4/1/2013.