Top Democratic Consultants Have Worked For Anti-Medicare for All Campaign 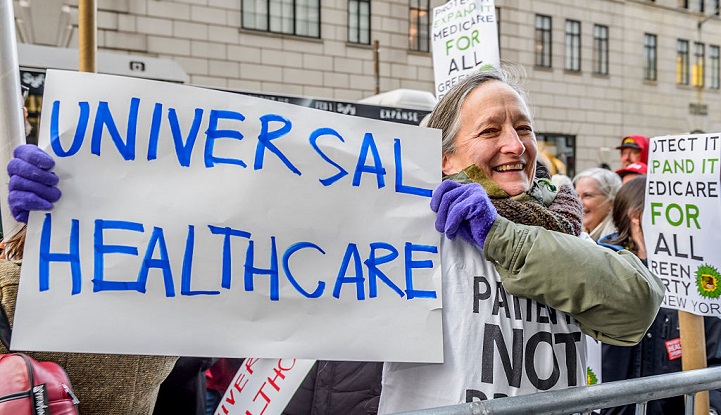 Advocates for a universal health care system rally outside Trump Tower in New York City in January of 2017.
Photo by Erik McGregor/Pacific Press/LightRocket via Getty Images.

As health insurance, pharmaceutical and hospital companies fight to prevent more politicians from backing Medicare for All, the industry’s front group has turned to top Democratic consulting firms and pro-business nonprofits for help, according to its 2018 tax return. The array of consultants includes presidential candidate Joe Biden’s pollster.

PAHCF’s biggest vendor was Forbes Tate, a bipartisan lobbying firm with ties to moderate Democrats. It paid the firm more than $1.7 million. The organization separately contributed almost $520,000 to Center Forward, a centrist think tank that hosted a luxury retreat last year where senior Democratic congressional staffers were invited to listen to Center Forward board member Libby Greer, a Forbes Tate partner who works for PAHCF, talk with a hospital lobbyist about health care. The organization also paid $192,000 to Business Forward, a trade group that has been warning that business leaders are worried about Medicare for All.

Despite its Democratic consultant roster, PAHCF has spent much of the past year and a half criticizing the party’s leading presidential contenders. The organization has regularly slammed the Medicare for All proposals offered by Sens. Bernie Sanders of Vermont and Elizabeth Warren of Massachusetts. It has also attacked former Vice President Joe Biden and South Bend, Ind., Mayor Pete Buttigieg for their plans to create a public health insurance option.

“While Medicare for All would eliminate private health coverage overnight, Joe Biden’s public option and other new government health insurance systems would eliminate it over time,” the organization tweeted during the September Democratic debate.

In response to questions, Anzalone Lizst Grove partner John Anzalone said via email, “ALG is a polling firm and we did a project in mid-2018 for PAHCF assessing voters’ views of the health care system, including keeping and improving on Obamacare and baseline knowledge and views on Medicare for All. This was the only project we conducted for PAHCF and have done no work for them since then.”

Jana Plat, the programming director at Business Forward, said her group hasn’t worked with PAHCF this year either. “We worked with the Partnership in 2018, have not worked with them this year,” she wrote in an email. “Our programming has focused on the ACA and reproductive healthcare. We’ve spent 10 years on the [Affordable Care Act], from helping pass it, to protecting it, to improving it.”

PAHCF’s list of members includes dozens of trade organizations and companies, but its tax return shows the organization has been led by executives at a few of the nation’s most influential health-care lobbying groups -- America’s Health Insurance Plans (AHIP), which represents health insurers in Washington; Pharmaceutical Research and Manufacturers of America (PhRMA), D.C.’s top drug lobby; the Federation of American Hospitals (FAH), a trade group for investor-owned hospitals; and the American Medical Association, which represents physicians.

The PAHCF filing lists AHIP executive vice president David Merritt as its president and PhRMA lobbyist Scott Olsen as its treasurer. The board of directors list also includes Jeff Cohen, but he left FAH this summer and is no longer on the board, according to a PAHCF spokesperson. Richard Deem, a senior vice president of the American Medical Association (AMA) named in the filing, has left the board as well, the spokesperson said. The AMA dropped out of the organization over the summer.

It’s not clear how much any of these organizations have donated to PAHCF. Tax returns filed by PhRMA and FAH for 2018 didn’t list any grants to the group. As MapLight previously reported, trade groups can finance front groups’ advocacy efforts without naming the organizations in their tax returns.

PAHCF reported raising $5.1 million in 2018. While the organization isn’t required to disclose its donors in its tax return, its filing shows its largest donor was $500,000. It received eight contributions of $300,000.

The American College of Radiology Association contributed at least $300,000 to PAHCF in 2018, according to their tax return. Tenet Healthcare, an investor-owned hospital company, donated $41,000 last year before kicking in $588,000 earlier this year

PAHCF has ramped up its spending in recent months, running television advertisements during Democratic presidential debates and making big ad buys in Iowa. “The politicians may call it Medicare for All, Medicare buy-in or the public option,” the ads claim. “But they mean the same thing. Higher taxes or higher premiums, lower quality care.”

Americans experience worse health outcomes than people in wealthy countries that have adopted single-payer style health care systems. Medicare for All would require people to pay more in taxes, but they would no longer have to pay health insurance premiums, deductibles or co-payments.

On Monday, PAHCF released a study by FTI Consulting asserting that a public option could “eventually cause the elimination” of all private health insurance plans offered on state exchanges created under the Affordable Care Act, the 2010 Democratic health care law.

Their reasoning: “The government would be expected to set premiums for the public option approximately 25 percent below market value for comparable private insurance plans.”

This story was produced in partnership between The American Prospect and MapLight.