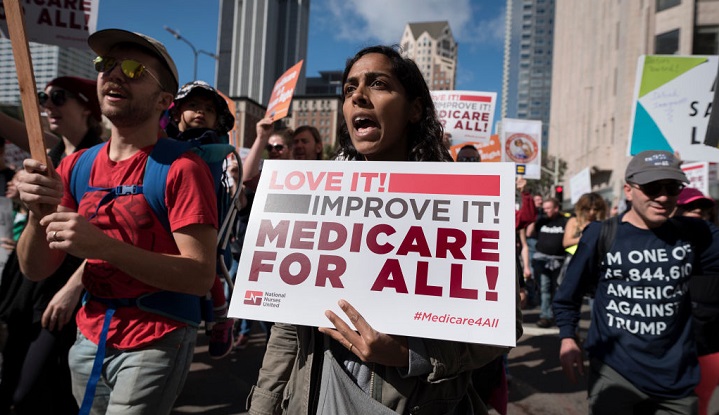 Activists call for a Medicare for All health care system at a rally in Los Angeles, California in February of 2017.
Photo by Ronen Tivony/NurPhoto via Getty Images.

This story is a collaboration between Sludge and MapLight, a nonpartisan research organization that tracks money’s influence on politics.

A top hospital lobbyist told a room of health care executives this week not to worry about “Medicare for All” and suggested that House Speaker Nancy Pelosi, D-Calif., won’t let the idea come up for a vote during the current Congress.

Although Nickels said that President Donald Trump and the Republican-controlled Senate would never support the idea of a government-run universal health care system, he predicted Pelosi also will work to block Medicare for All legislation, in hopes of protecting moderate Democrats in swing districts.

“We’re going to hear again from Mrs. Pelosi tomorrow,” he said. “She’s trying to thread the needle here, and she understands the difficulty that Medicare for All will provide for her caucus and for some of her members who have to go get re-elected, and my guess is she’s going to be pretty adept in making sure that nothing comes up that harms her members.”

Indeed, Pelosi -- who, along with the Democratic House leadership and party committee, has received hundreds of thousands of dollars from anti-Medicare for All interests -- did try to thread the needle at AHA’s conference on Tuesday. “We all share a common goal: quality, affordable health care coverage for all,” she said. “There are many paths to this goal; you’ve heard of some of them. Some of them may not be advocated today. Medicare for all, single payer, whatever it is, all that creative tension is valuable as we go forward.”

“But we can’t go down any path unless you strengthen the Affordable Care Act,” she said, referring to the 2010 health care law that Republicans have sought to overturn and have chipped away at for almost a decade. Although the ACA forced insurers to cover patients with pre-existing health conditions, nearly 14 percent of American adults were still uninsured at the end of 2018, according to Gallup. Insurance premiums, deductibles, and copays have continued to increase. The U.S. spends roughly twice what other high-income countries do on health care -- with worse results.

While Medicare for All is popular among voters, the party’s presidential candidates, and 108 House Democrats, Pelosi and other House leaders have questioned the potential costs of such a program and whether Americans would want to abandon their private health insurance plans. Congress will hold hearings on Medicare for All, but Pelosi hasn’t promised a floor vote for any single-payer bills.

“For a century, powerful corporations have been the main obstacle blocking the achievement of real universal healthcare in this country,” Adam Gaffney, president of Physicians for a National Health Program, told Sludge and MapLight. “Improved Medicare for All is popular and achievable -- we know how it would work, how to set it up, how to run it. The problem is the deep-pocketed interests who are happy with the status quo, who have limitless money to burn to keep the gravy train running.”

The AHA is one of more than two dozen health care trade organizations and companies that are members of the Partnership for America’s Health Care Future (PAHCF), a coalition created last year to oppose Medicare for All. A PAHCF spokesperson told MapLight and Sludge that it is a 501(c)(4) social welfare nonprofit organization registered in Delaware.

Last week, Sludge and MapLight reported that corporate lobbyists with clients in the health care industry, including PAHCF members, raised $440,000 during the first two months of the year for the Democrats’ main House elections arm, the Democratic Congressional Campaign Committee (DCCC). Politico reported this week that a number of House Democrats who have pledged to reject corporate PAC donations have held fundraisers with corporate lobbying firms or accepted donations from their employees.

PAHCF members’ PACs have contributed more than $1.2 million to the DCCC since 2009, including more than $190,000 from the AHA. The Council of Insurance Agents & Brokers has donated $152,000 to the DCCC, and has also given $90,000 to the committee’s "building fund." PAHCF members and their employees have also donated $76,000 to the campaigns of DCCC chairwoman Cheri Bustos, D-Ill., since she first started running for Congress in 2011. Bustos has received $34,000 from the AHA.

“The AHA and the other members of the PAHCF are clearly under the impression that if they spend enough, Democratic leadership will undercut Medicare for All,” said Dylan Dusseault, executive director of the Business Initiative for Health Policy, an advocacy group that supports Medicare for All. “So far, they've been proven right.”

“Instead of championing an issue that is incredibly popular with their voters, leadership has tried to divert attention towards tweaking a system that is fundamentally broken,” Dusseault said. “They need to demonstrate they care more about the American patients, families, workers, and businesses who are drowning in our healthcare system than the interests of a handful of donors.”

Although the DCCC recently prohibited its political consultants and vendors from working with Democratic candidates who decide to challenge the party’s incumbents, it has said nothing about PAHCF’s recent online advertising campaign attacking incumbent Rep. Lori Trahan, D-Mass., a Medicare for All supporter.

A positive Facebook ad from PAHCF features Bustos and a quote attributed to her about the need to fix the Affordable Care Act.

Another PAHCF ad, which ran on Facebook and Twitter, highlighted some of Pelosi’s criticisms of Medicare for All, noting that she’s asked, "How's it gonna be paid for?"

“Together, we will not relent in our shared mission to end injustice in health and advance progress for all,” Pelosi said at the end of her Tuesday speech. “Thank you all for your leadership on this important issue, and thank you for the honor of meeting with you today.”

Through a huge round of applause, Pelosi then read aloud the AHA’s slogan for the conference: “Meeting today’s challenges, creating a healthier tomorrow,” she said. “That’s a good mission for all of us.”