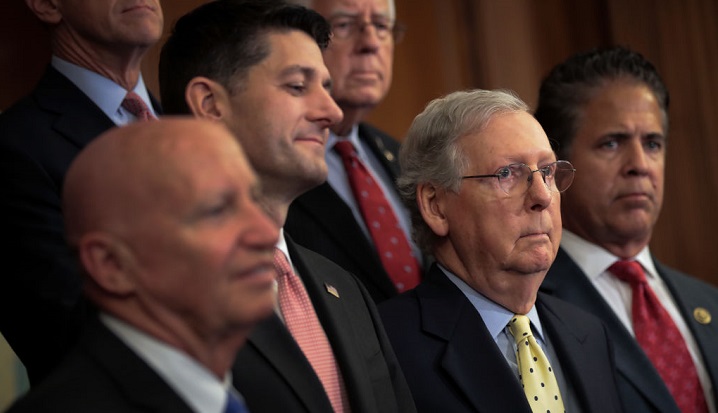 In a Sept. 27 speech, President Donald Trump said ending the estate tax would “protect millions of small businesses and the American farmer.”  In the wake of legislation passed today by Congress, it appears it will also protect Trump’s heirs, as well as the 10 Cabinet members who would leave multimillion-dollar estates.

People who inherit money from Trump and 10 Cabinet members will reap at least $20.7 million in estate tax savings as a direct result of the GOP legislation, according to a MapLight analysis of financial disclosures filed with the Office of Government Ethics. The measure, which is likely to be signed by Trump this week, doubled the exemption to provide for tax-free inheritances for estates worth as much as $11.1 million.

The bonanza for Trump and his top advisers adds more evidence to suspicions shared by a large number of Americans who believe the Republican-sponsored legislation is a massive transfer of wealth from the poor and middle-class to wealthy households. About two-thirds of U.S. voters surveyed earlier this month said they oppose the legislation, and 60 percent of Americans polled a month earlier believe it will mostly help the rich. House Minority Leader Nancy Pelosi, a San Francisco Democrat, called the measure “an all-out looting of America, a wholesale robbery of the middle class.”

The modern estate tax was created in 1916 to offset costs of World War I. It’s been a small part of the federal government’s treasury during the last century, generally contributing between 1 and 2 percent of total revenue. Loopholes and rising exemptions have played a part in its dwindling importance. Since 1999, the minimum amount of an estate that’s subject to the tax has risen from $650,000 to $5.5 million per person. Repealing the tax entirely would cost about $269 billion over a decade, according to the nonpartisan congressional Joint Committee on Taxation.

Other big Cabinet-related winners under the GOP legislation include the heirs of Agriculture Secretary Sonny Perdue, the former governor of Georgia ($2.2 million in estate tax savings) U.S. Trade Representative Robert Lighthizer, a longtime Washington trade lawyer ($1.9 million);  Veterans Affairs Secretary David Shulkin, a former healthcare executive ($1.1 million); Director of National Intelligence Dan Coats, a career politician whose net worth may be as much as $21.4 million ($1.1 million); and Transportation Secretary Elaine Chao, the wife of Senate Majority Leader Mitch McConnell, the Kentucky Republican who scheduled votes on the legislation before lawmakers were aware of its contents ($700,000).

Trump’s argument that an estate tax repeal would help farmers is incorrect. A March 2017 U.S. Department of Agriculture study estimated that only 161 farms owed any estate tax during the previous tax year.  Mnuchin acknowledged at an October conference that the estate tax “disproportionately helps rich people.”

MapLight analysis of “Other Assets and Income” data from financial disclosure reports for President Trump and the members of the Cabinet based on filings from the U.S. Office of Government Ethics. This data includes assets owned by the filer, the filer’s spouse, and any dependent children. This analysis does not account for other assets or liabilities, property left to a spouse or eligible charitable organization, or use of the gift tax exemption.