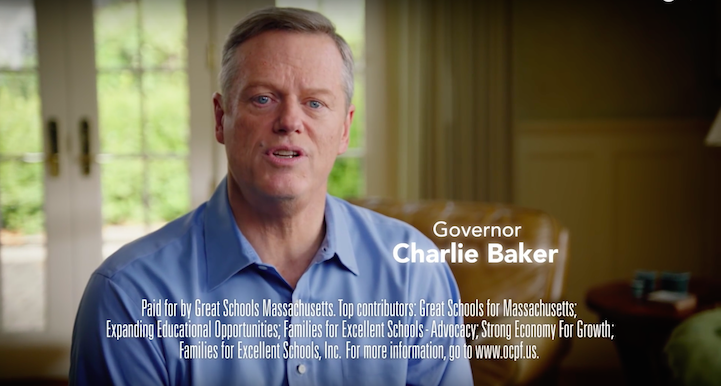 An investigation published last week by International Business Times and MapLight found that executives at eight financial firms contracted to manage Massachusetts state pension money have donated at least $778,000 to groups backing Question 2. Baker has been a vocal proponent of the initiative, which would expand the number of charter schools in Massachusetts. He filmed a recent ad in support of the measure, which the groups have put on television during the final weeks of the campaign.

Leaders of the American Federation of Teachers Massachusetts and the Massachusetts Teachers Association said they’re disturbed that Wall Street executives are collecting lucrative fees for managing their members’ retirement funds, and then using that money to boost a measure that they say will harm public education.

In a complaint filed Monday with the Securities and Exchange Commission, the unions asked regulators to investigate whether the donations violate federal “pay-to-play” laws. A 2011 rule from the Securities and Exchange Commission is designed to prevent financial firms that manage state pension money from donating to officials who can influence state pension investment decisions.

Because he appoints trustees to Massachusetts’ state pension board, Gov. Baker’s campaign is covered by the SEC rule. The restrictions do not cover ballot measures or policy initiatives, but the unions argue that the donations boosting Question 2 could aid Baker’s reelection in 2018, and therefore could be covered by the rule’s anti-circumvention provisions. Those provisions say that financial firms and public officials covered by the law cannot do “anything indirectly which, if done directly, would result in a violation of the rule.”

In the complaint, lawyers for the unions wrote that the “ballot committees have paid for television ads and other public communications that either prominently feature Governor Baker or may have been developed with his involvement.”

“Those contributions are ‘things of value’ that could influence his re-election, and, if so, are subject to the rule,” they said. “An investigation by the SEC could determine the full scope of Governor Baker’s involvement with the pro-Question 2 committees and their contributors who are regulated by the rule, and the application of the rule to those circumstances,” the lawyers wrote.

“This looks like pay-to-play on a grand scale that’s financing a TV ad campaign to boost the governor’s political standing,” said Tom Gosnell, the president of the state AFT, in a statement. “Until this investigation is concluded, the television ad featuring the governor should be removed from the air.”

Jim Conroy, a Baker adviser, called the complaint “a desperate attempt by special interests that want to deny families in urban area the ability to choose a better school for their kids,” according to the Boston Globe.

“The law is quite clear on this matter, but the special interests opposing Question 2 seem intent on doing everything in their power to distract from what really matters: the fact that 32,000 kids are desperate to get into public charter schools and are being shut out by protectors of the status quo,” said Conroy.

Conroy has worked as a consultant to Great Schools Massachusetts. That group recently put out an ad that features Baker touting Question 2. The teachers unions have demanded Great Schools Massachusetts stop airing the ad. The group has received $325,710 from executives at Berkshire Capital Management, State Street Global Advisors and Fidelity Management Trust Company. Berkshire and Fidelity have together secured $645 million in commitments from the Massachusetts Pension Reserves Investment Management Board.

Baker’s advisers maintain that the governor has not personally raised money for committees backing Question 2. A long-time supporter of charter schools, Baker has, however, appeared at rallies boosting the measure and has canvassed for it as well.

In the 30-second spot from Great Schools Massachusetts, Baker speaks directly to the camera for much of the ad, and makes a personal plea for voters to help students in struggling public school districts get access to publicly-funded, privately-run charter schools.

“Imagine if your kids were trapped in a failing school,” Baker says in the ad from Great Schools Massachusetts. “Public charter schools give parents a choice that are a pathway to success for these kids. If you like your school, Question 2 won’t affect you. But Question 2 will change the future for thousands of kids who need your help. Please join me and vote yes on Question 2.”