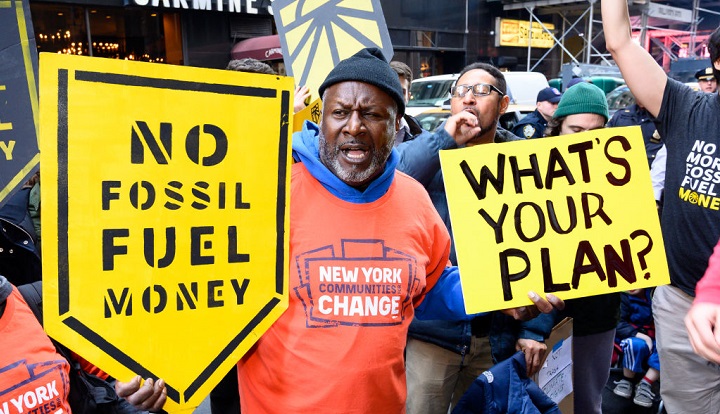 Demonstrators rally for the Green New Deal in New York City in February of 2019.
Photo by Michael Brochstein/SOPA Images/LightRocket via Getty Images.

Unleashed by a 2010 Supreme Court decision allowing corporations to make unlimited political contributions, about three dozen of the nation’s largest energy and utility companies pumped almost $60 million into campaign committees, ballot measures, trade associations, and nonprofits during 2017, according to a MapLight analysis.

The analysis of data compiled by the Center for Political Accountability found the corporations gave at least $31.4 million, or more than half of their 2017 contributions, to politically powerful trade organizations that included the American Petroleum Institute, U.S. Chamber of Commerce, and Edison Electric Institute.

The millions in corporate donations highlight the obstacles faced by environmental activists who are battling to win approval for legislative initiatives such as the Green New Deal, a resolution designed to mitigate the worst effects of climate change by reshaping the $20.7 trillion U.S. economy.

Although the trade associations represent the bulk of political power for the energy corporations, the data compiled by the center also show the 39 companies made significant donations to “dark money” nonprofit organizations, which are allowed to shield the identities of donors ($9.3 million); individual candidate and party committees ($8.6 million); nonprofit political organizations known as 527 Groups, which must disclose their donors ($8.5 million); and ballot measures ($2.1 million).

At least 17 energy and utility companies made donations topping $1 million during 2017, according to the CPA data. Chevron Corp. led all energy and utility donors with almost $12 million in donations. Almost half of the San Ramon, Calif.-based oil and gas giant’s donations went to trade organizations, including the California Business Roundtable ($4.5 million), the U.S. Chamber of Commerce ($750,000), and the Business Institute for Political Analysis ($150,000). The three associations have fought aggressive attempts to mitigate the effects of climate change. The donations by Chevron were the largest single contributions that energy and utility corporations disclosed sending to the three trade organizations.

Chevron also gave $3 million to super PACs and political nonprofits known as 527 Groups that are allowed to engage in political activities while disclosing their donors. The corporation contributed $1 million to the Congressional Leadership Fund, a nonprofit linked to former House Speaker Paul Ryan, R-Wis., and another $700,000 to the Senate Leadership Fund, allied with Senate Majority Leader Mitch McConnell, R-Ky. Chevron also gave $500,000 to the Coalition to Restore California’s Middle Class, Including Energy Companies Who Produce Gas, Oil, Jobs and Pay Taxes. The coalition, funded by energy companies, has spent money to influence California state races in favor of candidates taking a skeptical or less-aggressive view of the impacts of climate change.

The company spent the most of any major energy or utility interest on ballot measures, dropping slightly more than $1.5 million to continue a court fight against Measure Z. The money donated to Californians for Energy Independence was used to fight a Monterey County, Calif., bid to ban hydraulic fracking that won the most corporate support of any ballot initiative during 2017, according to the CPA data.

The measure was passed with 56 percent of the vote, but Chevron filed a lawsuit to prevent it from taking effect. The Monterey County Board of Supervisors eventually settled the lawsuit; the fracking ban was upheld, although parts of Measure Z were overturned, including provisions that affected new and existing oil and gas wells, as well as restrictions on wastewater injection sites.

The oil company’s contributions also were the largest among energy and utility companies for the California Business Roundtable, whose $6.5 million total included a $4.5 million donation from Chevron.

Although Chevron was the biggest-spending company for ballot initiatives, 527 groups, and individual committees, a utility donated more to nonprofit “dark money” organizations than any major corporation. Pinnacle West Capital, the Arizona monopoly power company, gave $5.1 million to a half-dozen of the nonprofits, which aren’t required to disclose their donors.

The ballot measure, which was the most expensive in the state’s history, would have required Pinnacle to obtain 50 percent of its power from renewables by 2030. The Arizona Republic reported that Pinnacle West spent at least $37.9 million on the measure, which lost by a 69-31 percent vote.

Edison Electric Institute, the Washington, D.C.-based trade association for the nation’s investor-owned utilities, received about $6 million from the major corporations in the CPA database, the most of any utility trade organization. Although Edison has acknowledged the existence of climate change, it’s emphasized mitigation efforts that “minimize impacts on consumers and avoid harm to U.S. industry and the economy.”

DTE Energy was the largest single contributor to the trade organization. The Detroit-based gas and electricity company gave $1.3 million to Edison. The amounts, however, underscore the incompleteness of voluntary corporate reporting for political donations; Edison’s tax return showed that it received $90.1 million in revenue during 2017.