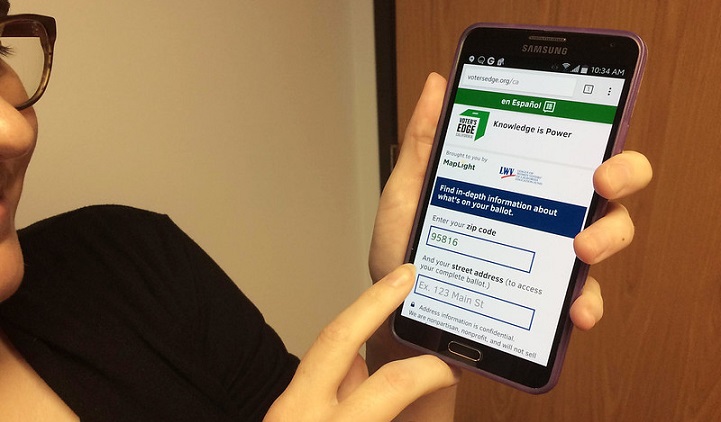 Voter's Edge California is available on both desktops and mobile devices.
Photo from the League of Women Voters of California Education Fund.

Voter's Edge California, a comprehensive online voter guide in English and Spanish, launched today to provide voters with unbiased information on candidates and ballot measures from the top of the ticket down to the local level. California voters can make informed choices using Voter's Edge to explore candidates' priorities, endorsements and top donors, as well as ballot measure explanations and campaign funding.  Information in the guide is updated daily.

To use the guide, voters simply enter in their home address and Voter's Edge California shows a personalized page with all the contests that will appear on the user's ballot, including endorsements, funding sources, editorials, news articles, and biographies.

Voters will also find their polling place or vote center and can mark their choices and print their ballot to bring to the polls or share with family and friends via social media.  Voter's Edge California is a joint project of MapLight and the League of Women Voters of California Education Fund (LWVCEF).

The California Primary Election on March 3 is one of 14 contests across the country scheduled to take place on “Super Tuesday” in the Democratic Party presidential primaries. California voters also have the opportunity to vote on a statewide bond measure as well as primary candidates for Congress, the California State Legislature, and other local offices. In past election cycles, California voters have been forced to wait until June to cast primary ballots, at which point presidential nominees have largely been decided. This year, California voters can begin voting by mail this week. Voters with questions about their registration or voting for president in the primary if they are registered as No Party Preference can visit the voting information section of Voter’s Edge.

“Voter’s Edge counters the avalanche of misinformation dominating and suffocating informed political debate,” said Stephanie Doute, Executive Director of the LWVCEF.  “Our guide helps to ensure that every person has access to accurate and easily understood election information so that everyone has the knowledge and confidence to exercise their power and right to vote.”

In 2018, two million voters in California used Voter’s Edge to help them make decisions about their ballot choices — equivalent to 1 in 8 of the state’s voters. More than three quarters of Voter’s Edge California users reported that they would vote for more offices and leave fewer choices blank because of the information in the guide while more than 90 percent said the guide made them feel more confident about making the right choices on Election Day.

"Voter's Edge California provides voters with information in a way that is efficient, easy to understand and accessible — including from their mobile phones," said Daniel G. Newman, Co-Founder and President of MapLight. "We are thrilled to help voters make informed decisions about their ballot and increase civic engagement in 2020."