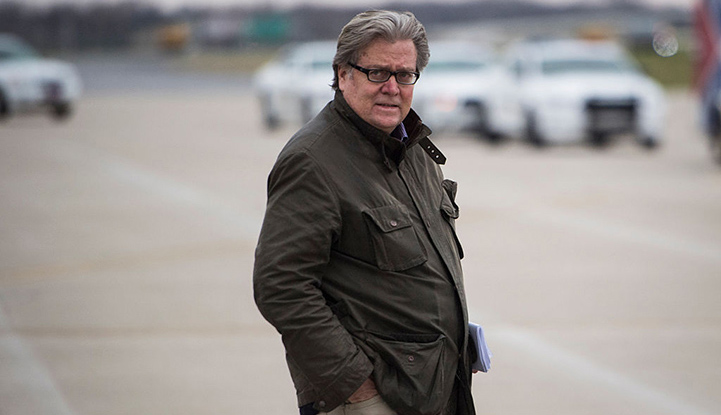 A campaign finance watchdog group sent new evidence to the Federal Election Commission on Friday to support its call for an investigation into whether President-elect Donald Trump’s campaign illegally coordinated with super PACs.

The Campaign Legal Center filed a complaint in October alleging that a pro-Trump super PAC may have paid the salary of Trump’s campaign chairman, Steve Bannon. The super PAC, called Make America Number 1, may have also made prohibited “coordinated communications” by employing the same data firm as the campaign, the complaint said.

On Friday, the Campaign Legal Center sent a letter to the FEC asserting that Make America Number 1 had continued to pay Bannon’s salary after the October complaint was filed. The group’s lawyers wrote that if the “super PAC subsidized Bannon’s work for the Trump campaign, it violates federal campaign finance law.” The letter also noted that both Make America Number 1 and the Trump campaign kept working with the data firm Cambridge Analytica.

If the FEC decides to open a formal investigation, Trump’s campaign and the super PAC could face fines or civil penalties. A spokesperson for the agency declined to comment on the complaint, citing confidentiality rules. Spokespersons for Trump and Make America Number 1 did not respond to questions from MapLight.

During the Republican primary race, Trump dismissed support from outside groups, and he criticized his opponents for being “in total cahoots with their [super] PACs, which they're not allowed to be." But during the general election, the real estate mogul’s team embraced outside help and tested regulations meant to ensure outside groups are independent from candidates.

Trump’s campaign never paid Bannon, a self-professed “nationalist” who served as head of the far-right news site, Breitbart News. But Make America Number 1 made big payments to Glittering Steel, a movie production company reportedly tied to Bannon. The super PAC paid the firm a total of $280,000 between August, when Bannon joined the campaign, through November, according to FEC records.

All three companies have recently moved. Bannon Strategic Advisors appears to have changed its address with the California Secretary of State’s office on the same day the Campaign Legal Center filed its October complaint.

The Trump campaign and Make America Number 1 each paid millions to Cambridge Analytica, the data firm that has taken credit for helping Trump achieve his stunning victory last month. The firm is a U.S.-based spinoff of SCL Group, a London "global election management agency" that uses advanced analytics to target potential voters.

Cambridge Analytica did not respond to a request for comment.

Cambridge Analytica bills itself as offering psychographic profiles of individual voters, based on "OCEAN" attributes, for openness, conscientiousness, extraversion, agreeableness, and neuroticism.

During the GOP primary, when the Mercer family supported Ted Cruz, the Texas senator’s campaign hired Cambridge Analytica to handle its digital advertising purchases. His team dropped the firm early on in the race, saying it had failed to deliver on its promises.

Now, with Trump set to take over the White House, Bannon is in line for a promotion. Trump appointed him to be the White House’s chief strategist, a decision that outraged civil rights groups alarmed by reports that Bannon holds racist and anti-Semitic views.

Cambridge Analytica is poised to cash in as well. According to the Guardian, the firm is in talks with Bannon about a contract to help build support for Trump’s policy agenda, and with the Trump Organization about assisting the president-elect’s commercial enterprise with sales.