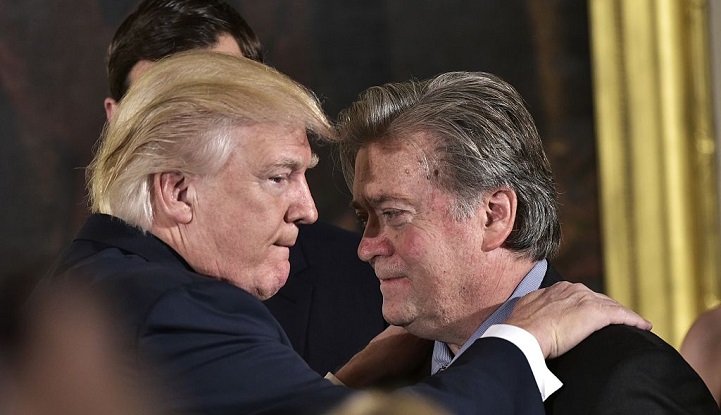 This article was produced by MapLight in partnership with Fast Company.

A campaign finance watchdog said Wednesday that chief White House strategist Steve Bannon may have illegally benefited from spending by a pro-Trump super PAC while he led Trump’s presidential campaign.

While Trump initially criticized his Republican opponents for their close ties to super PACs and disavowed outside groups that sought to support his bid, his team embraced outside help during his general election race against Hillary Clinton and pushed the boundaries of federal election rules as much as any other 2016 candidate, testing regulations meant to ensure super PACs operate independently from campaigns.

The filing says Bannon resigned from Glittering Steel and stopped receiving monthly consulting payments from the company in August 2016, when he joined the Trump campaign. But the form indicates Bannon kept an ownership interest in Glittering Steel, worth at least $100,000. Bannon’s report says he’s trying to sell his stake in the company.

“As a result, as Bannon worked for the Trump campaign without pay, he continued to benefit, directly or indirectly, from the estimated $267,500 in payments that Make America Number 1 made to Glittering Steel LLC after or around his officially joining the campaign,” wrote the Campaign Legal Center’s general counsel, Larry Noble.

The Campaign Legal Center first filed its complaint with the Federal Election Commission in October. It’s unclear if the agency has decided to investigate, as the FEC doesn’t disclose investigations until they’re completed. Its commissioners have frequently deadlocked on whether to pursue apparent election law violations.

Overall, the FEC has done little to ensure that super PACs remain independent from candidates in the wake of the Supreme Court’s 2010 Citizens United decision, which allowed companies and unions to spend unlimited amounts of money on elections.

The Mercers pressed Trump to hire Bannon to lead his campaign, according to the Washington Post. Over the years, the Mercer family has funded Breitbart News, as well as the Government Accountability Institute, a conservative investigative nonprofit led by Bannon. Bannon and the Mercers founded Glittering Steel together, the Post reported.

The Mercers are also major investors in Cambridge Analytica, a data firm that worked for both Make America Number 1 and the Trump campaign. Bannon received monthly consulting payments from Cambridge Analytica and served on its board. Though Bannon’s financial disclosure says he resigned from the firm when he started working for Trump, he still has a stake in the company, worth over $1 million, that he’s planning to sell.

The Campaign Legal Center said that there’s reason to question whether Bannon did in fact resign from Glittering Steel and Cambridge Analytica in August.

The relationship between Bannon and Breitbart News, which gave Trump favorable coverage throughout the campaign, has generated controversy in recent weeks. Bannon has reportedly maintained contact with Breitbart editors about the site’s coverage. That news prompted a liberal watchdog group, Citizens for Responsibility and Ethics in Washington, to request an investigation into whether Bannon has violated his White House ethics pledge.

News reports suggested last week that there’s a growing rivalry between Bannon and Trump’s son-in-law and advisor Jared Kushner, and that Bannon could be on his way out the door, after Trump removed Bannon from a position on his National Security Council.

Trump did little to quiet talk of a shake-up on Tuesday when the New York Post asked him if he still has confidence in Bannon. “I like Steve, but you have to remember he was not involved in my campaign until very late,” he said. “I had already beaten all the senators and all the governors, and I didn’t know Steve. I’m my own strategist and it wasn’t like I was going to change strategies because I was facing crooked Hillary.”