What WikiLeaks Emails Reveal About The DNC, The White House And Lobbyists 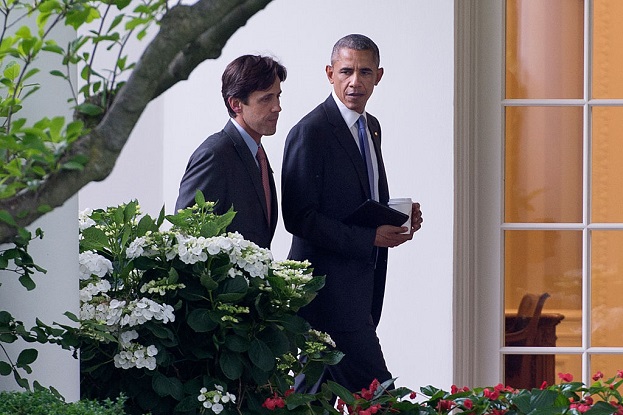 July 26, 2016 - When Barack Obama became the Democratic presidential nominee in 2008, he directed the national party to reject donations from federal lobbyists. "We will not take a dime from Washington lobbyists or special interest PACs,” he said. “We're going to change how Washington works. They will not fund my party.”

The ban was perceived as symbolic and did little to stop the flow of corporate cash to the Democratic party, but it was heralded by government watchdog groups as a positive step towards limiting the influence of business interests over policymaking. Now, late into Obama’s presidency, the Democratic National Committee has begun accepting and soliciting lobbyist cash, and the White House has warmed to the idea of lobbyists playing a role in the party’s fundraising.

Under the party’s new fundraising policy, detailed by the Washington Post in February, lobbyists cannot participate in DNC events with President Obama, Vice President Joe Biden or their wives. But lobbyists can attend party events with White House staffers, according to a MapLight review of DNC emails. The messages were part of the nearly 20,000 emails from hacked DNC accounts that were released by WikiLeaks on Friday.

Last month, the DNC hosted a fundraiser with White House political adviser David Simas at the Washington, D.C. offices of Hogan Lovells, a multinational law and lobbying firm. The White House approved the venue and cleared a federal lobbyist to serve on the event’s host committee, emails show. Co-hosts for the event were expected to contribute $5,000 to the DNC, according to its website.

“We have consistently applied the Obama administration's rule that the president does not assist in raising money from lobbyists, which includes attending events where lobbyists are paying to attend or are co-sponsoring,” a White House official told MapLight. “These rules were followed for this event.”

Under federal ethics rules, government officials may attend and speak at fundraisers in their personal capacity, but they are not allowed to directly solicit contributions. Simas did not solicit funds at the event, according to the White House.

Scott Comer, the DNC’s finance chief of staff, first reached out to the White House’s Office of Political Strategy and Outreach in May to request that Simas be “the surrogate” at a reception for the DNC’s Heritage Council, according to emails.

A document Comer included with his email describes the Heritage Council as a membership group “designed to engage diverse communities of ethnic leaders.” Members are offered an “opportunity to hear from top surrogates,” and are promised “access to insider knowledge of the DNC's election strategy” and briefings on voter expansion projects and immigration policy.

While Comer wrote that the event would “most likely be held at a restaurant” in Washington, the Hogan Lovells rooftop was ultimately selected as the venue. Alan Reed, a DNC compliance director, questioned the venue in an email to his colleagues and the White House, noting that the firm’s employees “do significant lobbying.” The next day, Reed emailed again: “Any thoughts or objections from anyone on this venue?”

A week later, a DNC compliance staffer vetting contributions for the Heritage Council event alerted Schmuck and Reed that one of the proposed hosts, Maryland state Sen. James Rosapepe, is also a federal lobbyist.

“Since he is a MD state senator I can be ok,” Reed wrote back, before asking Schmuck for the White House’s opinion. Schmuck simply responded, “Yeah.” A copy of the event invitation posted online shows Rosapepe was included on the host committee.

Emails show the DNC also sought clearance to include a Hogan Lovells lobbyist, Christine Warnke, on the host committee. The emails released by Wikileaks don’t include a response from the White House to the request, but Warnke’s name wasn’t included on the invitation. The DNC and Hogan Lovells did not respond to questions about the event.

The Wikileaks email dump set off a firestorm within the Democratic party as it prepares to formally nominate Hillary Clinton. Many of the emails released suggest the party favored Clinton over Vermont Sen. Bernie Sanders during the primary process, as his supporters long suspected. DNC chair Debbie Wasserman Schultz announced Sunday she would resign from her position.