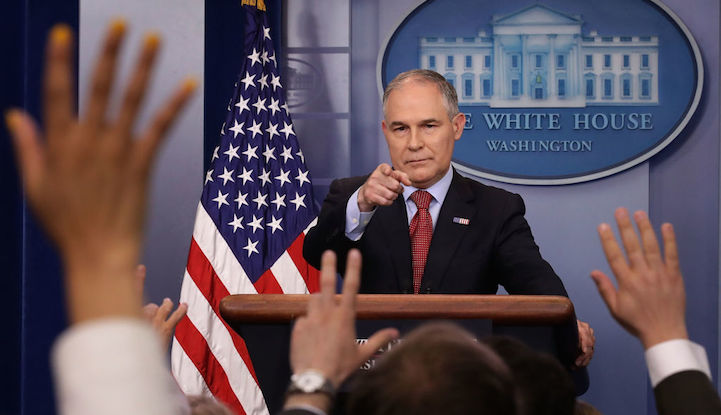 A timber executive organized a secret Earth Day visit to an elementary school for Environmental Protection Agency Administrator Scott Pruitt, according to emails and text messages reviewed by MapLight.

Wanda Barrs, a former Georgia education board member and co-owner of Gully Branch Tree Farm, told the Bleckley County Schools superintendent in early April that “a special visitor” wanted to visit their elementary school on April 23. She said that Pruitt’s office “asked that we keep the visit very low key (small circle of folks in the know) until arrival for security reasons.”

School officials listened. The superintendent directed the school's principal to “tell your folks to keep this under wraps." The principal told school employees “not to share this outside of school."

The correspondence, obtained through a public records request, underscores Pruitt’s penchant for excessive security measures and his preference for industry over the public. The EPA has routinely concealed Pruitt’s public events and refused to provide the public information about his Georgia trip, although at least 18 timber executives were invited to the elementary school for his announcement of a new biomass policy. The former Oklahoma attorney general has come under fire for the construction of a $43,000 taxpayer-funded secure phone booth in his office, as well as a below-market rental of a Washington townhouse from a lobbyist whose clients had business before the EPA.

“Transparency keeps people honest,” said Keri Powell, an attorney for the Environmental Integrity Project, a Washington, D.C.-based nonprofit. “Scott Pruitt’s pattern of keeping everyone in the dark about EPA’s plans other than industry executives and lobbyists should make all of us suspicious of his motives. He should be working for the American public, not for polluting industries.”

Pruitt used the secret elementary school visit to announce the EPA’s controversial decision to consider burned biomass from forest products as “carbon neutral.” The new policy treats burned biomass as a renewable source of energy like wind or solar power -- even though scientists say the move could increase CO2 emissions in the short term and exacerbate climate change.

At the event, Pruitt helped students plant a tree. He also read The Tree Farmer to them. The book is described as the tale of a boy who “confronts his grandfather, a tree farmer, about how he can grow trees with so much love and care, only to cut them down.”

The EPA did not respond to questions from MapLight.

A few days before the event, Barrs emailed a copy of the guest list to EPA and school officials. “Since we have learned of Admin. Pruitt’s desire to announce carbon neutrality related to forests, numerous guests have accepted our invitation to witness this historic announcement,” she wrote. “Many of us have been working for over 15 years to bring this to reality and are eager for the beneficial outcomes for community, state and nation.”

Dave Tenny, the president of the National Alliance of Forest Owners (NAFO), was among the guests at the elementary school. Federal records show he has lobbied the EPA this year on “policies affecting the regulation of forest biomass and carbon.” Barrs’ husband, Earl, serves on the trade association's board of directors and also attended the event.

The Environmental Integrity Project released a report last month arguing that biomass shouldn’t be considered a carbon-neutral fuel. “Burning trees to make energy does nothing to stop climate change,” said Powell, the organization’s attorney. “Not only is it not at all carbon neutral, but it creates tons of air pollution and destroys our forests.”