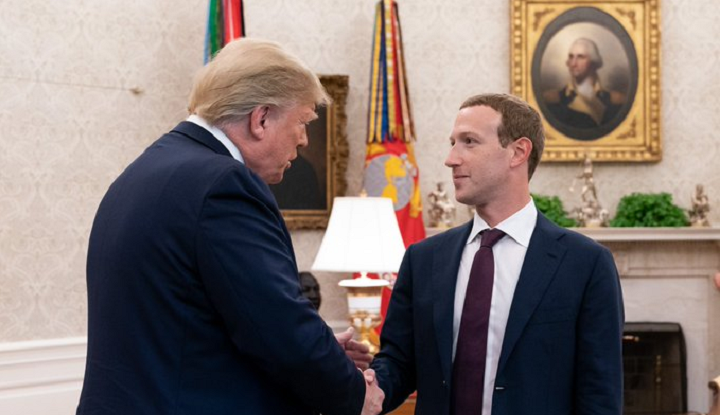 Mark Zuckerberg has rigged the rules of Facebook political advertising, making him complicit in lies and voter manipulation. The result is the most powerful propaganda amplifier in history, boosting campaigns that traffic in falsehoods.

Zuckerberg’s company screens some paid political advertising for lies. But since early October, it makes an exception: When candidates pay for the ads, it will run any ad — even those with blatant lies. Who does this exception help? Politicians who lie.

The most prominent lying politician in America is, of course, President Trump. Of more than 700 of Trump’s claims reviewed by the fact-checking site Politifact, more than 70% were rated “mostly false,” “false,” or “pants-on-fire” lies.

My organization, MapLight, has been exposing negative influences on our democracy for fifteen years. We’ve written widely about how to solve the complicated and pervasive problems of political manipulation online. But you don’t need to be an expert to understand that spreading political lies for profit corrodes democracy.

Trump’s re-election campaign quickly jumped through the door Zuckerberg opened, running ads with widely debunked lies about a Democratic presidential candidate. We can expect escalating amounts of vicious, paid lies from the Trump campaign on Facebook as the months go by. Other politicians are likely to follow suit, making it increasingly difficult for voters to make informed decisions.

The rules of politics and media help shape who we elect as our leaders. Zuckerberg’s rules are helping President Trump and others who lie.

What is Zuckerberg’s motive? He is afraid of a president that will rein in Facebook’s power. Several Democratic candidates have said that they would do exactly that: seek to break up Zuckerberg’s company. This would “suck,” said Zuckerberg in leaked audio recordings. “If someone’s going to try to threaten something that existential, you go to the mat and you fight.”

Key executives advising Zuckerberg on ad policies have ties to Trump and to Trump’s allies. Facebook’s VP of global public policy, Joel Kaplan, lobbied for the nomination of controversial Supreme Court justice Brett Kavanaugh and sat behind Kavanaugh at his televised confirmation hearing. Just weeks ago, Facebook sponsored an event where Kavanaugh was the keynote speaker. Zuckerberg’s head of global elections policy, Katie Harbath, was formerly a deputy director for the presidential campaign of Rudy Giuliani, now an attorney for President Trump.

Peter Thiel, a prominent Trump supporter, is a longtime Facebook board member. Zuckerberg and Thiel dined with Trump at the White House in late October, in a secret meeting uncovered by NBC News. What did Trump and Zuckerberg discuss during this meeting, held so soon after Zuckerberg changed his company’s ad rules to help lying politicians? And why was the meeting secret? Neither Zuckerberg nor Trump will say. Based on what we have learned from the impeachment hearings about how Trump does business, he may have offered benefits to Zuckerberg. Perhaps he suggested that he won’t ever regulate Facebook — if Zuckerberg keeps the ad rules that help him get re-elected. This is Zuckerberg’s quid pro quo, whether explicitly spoken or not.

Zuckerberg hides behind claims of “free expression,” but his defense of Facebook’s ad policies is morally bankrupt. As Sacha Baron Cohen said last month, “If Facebook were around in the 1930s, it would have allowed Adolf Hitler to post 30-second ads on his ‘solution’ to the ‘Jewish problem.’”

Technology companies must be held accountable for allowing political deception to spread in our democracy. The government must mandate that companies increase transparency for who is paying for political ads and who they’re targeting. It must also make it clear that it is the responsibility of platforms like Facebook to prevent lies from corroding political conversation. Until this happens, we must all pressure Facebook to refuse to run political ads that are lies, no matter who is placing the ad.

Zuckerberg follows in the footsteps of wealthy corporation owners throughout history who have aligned themselves with authoritarian leaders for profit. His propaganda machine boosts those who spread vicious lies to consolidate power, under the cover of free speech and sharing photos with grandma.

Daniel G. Newman is president of the nonpartisan democracy organization MapLight and the author of Unrig: How to Fix Our Broken Democracy (worldcitizencomics.com).